Studies routinely show that consumers overwhelmingly preferred self-service options over interacting with an associate, so we created a robust mobile ID-verification process and had a staff member physically inspect it.

When Shiji Group invested in StayNTouch in 2016, the goal was to help propel a PMS that could revolutionize the guest experience.  Later, when we fully acquired StayNTouch in 2018, we intended to accelerate that process and push the boundaries of hospitality tech.

Prior to 2016, StayNTouch had already reimagined the guest journey by developing one of the world’s first mobile property management systems, but it needed Shiji’s resources and technological expertise to fully realize its vision. The advantage of a mobile PMS for travelers and hoteliers alike is that it streamlines the check-in process, improves operational efficiency and eliminates the need for an imposing front desk.  Guests are given a choice of checking-in through their mobile device, a smart kiosk in the lobby, or a friendly hotelier with a tablet. While this approach greatly improved the personalization and convenience of the check-in experience, there was still one major sticking point: ID verification.

Studies routinely show that consumers overwhelmingly preferred self-service options¹ over interacting with an associate, even as the threat of fraud and identity theft continues to rise. How could we create a robust mobile ID-verification process without defaulting to a staff member physically inspecting the ID in person? In short, how could we make ID-verification as secure and seamless as taking a selfie?

The solution was to completely reimagine our guest-facing check-in...again. While simple ID scanning is not a new technology, the use of AI and facial recognition to verify an individual using information scanned directly from the ID was not being done yet.  Ultimately, we developed a series of interlocking technologies that allowed us to become the first PMS on the market to let guests make secure walk-in reservations from a mobile phone or smart kiosk. As Nicole Dehler, Vice President of Product Management for StayNTouch elaborates,  “With Shiji’s support, we were able to develop a system that captures and enhances the security of a traditional in-person check-in, while actually increasing the seamlessness of the check-in experience for guests.”

“We were able to develop a system that captures and enhances the security of a traditional in-person check-in, while actually increasing the seamlessness of the check-in experience for guests.”

Experience our seamless ID verification process in action by watching the video above.

How Do You Define a “Passport” In a Way That a Machine Can Understand?

At the forefront of these enhancements, is a custom AI framework that can detect the presence of a human face on a document. Existing automatic ID detection programs would simply take a picture of whatever was in front of the camera, whether it was a legitimate ID or just a piece of paper. Our team improved upon this by developing a machine-learning algorithm that could identify when a document was in fact a government ID, and then direct the system to “read” it’s contents.

To optimize the system for an international hotel environment, we also programed it’s AI to differentiate between a driver’s license and a passport. This is more difficult than it would appear at first glance: How do you “define” a “passport” in a way that a machine could understand? The solution came in the form of hardware: StayNTouch partnered closely with Alia Technologies to design a minimalist kiosk for their self-service solution, complete with a custom document tray, specifically designed to function with the system’s AI.

But the development process was far from linear.  Our product development team worked day-to-day with AliaTech to develop nine iterations of the document tray before they felt it was ready for launch, tweaking everything from ergonomics, to lighting and camera angle, to its ability to accept drivers licenses and both 25- and 50-page passports.

The result was a simple but brilliant method of differentiating between types of IDs: The tray was designed so that driver’s licenses would be placed in the center of a comparatively deep dish. When the camera’s flash was turned on to take a picture of the ID, the walls of the dish would create a shadow which the AI could detect from the surrounding tray. As Pierre Boettner, StayNTouch’s Senior Director of Product and Technology remarked, “Innovation isn’t about following a planned script. It’s about trying something entirely new, failing, and then using what you’ve learned to create something even better.”

“Innovation isn’t about following a planned script. It’s about trying something entirely new, failing, and then using what you’ve learned to create something even better.”

ID Verification That’s as Easy as Taking a Selfie

Once a guest produces an ID, our facial recognition software matches a guest’s face to their photo ID based on immutable biometric characteristics, so it can’t be fooled by facial hair or glasses. Our programmers also developed an advanced liveness-detection test to ensure that the system is scanning an actual person: Using dual-camera technology, our facial recognition systems can now detect both image movement and depth, providing additional security against deep fake and image-spoofing attacks.

Our ID authentication uses Acuant’s AssureID system, which matches guest IDs against a 200+ country document library一the largest in the industry一all in real time. The system can also scan the textual elements of an ID to create or search for a reservation without requiring guests to enter their information manually. The guest’s ID photo is also uploaded as their avatar in StayNTouch’s Rover PMS, so that staff can recognize a guest, without requiring additional presentations of their ID.  All data related to the picture ID scan (including ID details and picture) is removed from the our systems between zero and 30 days, to comply with both privacy and law enforcement regulations.

Ultimately, we were able to develop a system that is both more secure and more convenient than a traditional in-person check-in. After approximately eight months of in-house development and significant backing from Shiji, StayNTouch was able to develop a mobile ID-verification system from the ground up, essentially re-reinventing guest-facing check-in in the process.

Market-centric innovation involves listening to your customer base, learning about their needs, preferences and sticking points, and looking for ways to implement solutions that will benefit their staff and their guests. There are myriad ways for a hotel to manage ID-verification, but finding a way that is both secure and can fit seamlessly within a mobile self-check-in system requires a lot of work. Making something simple on the front end, requires moving all the complex work to the back-end. But in the end both staff and guests win.

Shiji has always been committed to connecting the global business of hospitality. We understand that when businesses are better connected with their technology, they can more effectively connect with their guests. 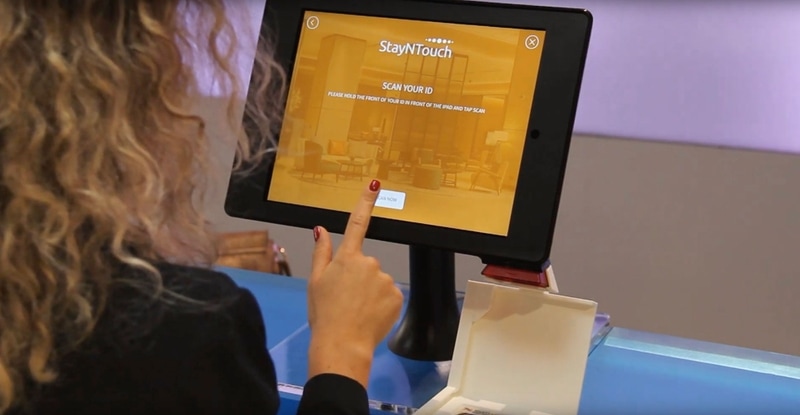